5 Takeaways from the French Election

Centrist Emmanuel Macron soundly defeated far-right nationalist Marine Le Pen in the second round of voting in the French presidential election on Sunday May 7. With 66.1% of the vote, Macron came out on top in all but two regions in France. Le Pen received 33.9% of the total vote. Of course, the question on everyone’s mind: now what? Here are five takeaways from Macron’s victory.

1. The elections aren’t over

Back in April 2016, Macron founded his own political party En Marche! (“Let’s move!”), and resigned from President Hollande’s socialist government shortly after. Being a new party, En Marche! currently has no deputies representing them in the Assemblée Nationale. Lucky for Macron, France’s legislative elections are this June 11 and 18 (like the presidential election, there are two rounds of voting) and the 577 seats are up for grabs. In order to effectively govern, Macron needs En Marche! to win a majority so he can make good on his campaign promises. In January, Macron promised that the party would field candidates in all 577 parliamentary constituencies. Only 14 candidates have been named so far. It will require immense effort and coordination on En Marche!’s part to get representatives into races and elected, but it’s not impossible.

Despite Le Pen’s landslide loss, she and her party aren’t going anywhere. Le Front National (the National Front) has slowly gaining power in French politics since 1972. As the head of the party, Le Pen has brought the Front National into the mainstream, and elected representatives into government. Le Pen’s 33.9% of the votes is an improvement from her father’s 17.7% in the 2002 election (he lost). Currently the Front National holds two seats in Assemblée National, but has hopes to win at least 15. If they win a significant number of seats, they’re certain to obstruct Macron every chance they get. Aside from leading efforts to elect party representatives to government, Le Pen vowed in her concession speech to lead the resistance against Macron’s government. Le Pen has also indicated plans to reform the Front National again, most likely to broaden its appeal and bring in a wider berth of voters.

3. Newfound hope for the European Union

The most pro-European Union (EU) candidate on the ballot, Macron’s win will ensure the EU’s existence for at least a while longer. Le Pen campaigned for a Frexit, believing that it was in France’s best interest to depart from the EU and return to the franc, a move that surely would have tanked the French and European economies. With Macron as the new leader of the French republic, he’ll be an essential voice protecting the EU from populists hoping to dismantle it. Leaders of the EU view Macron’s win with great optimism. The European Commission chief Jean-Claude Juncker tweeted that he was “happy that the French have chosen a European future.” European Council President Donald Tusk tweeted his congratulations to Macron and the French “for choosing Liberty, Equality and Fraternity over tyranny of fake news.” 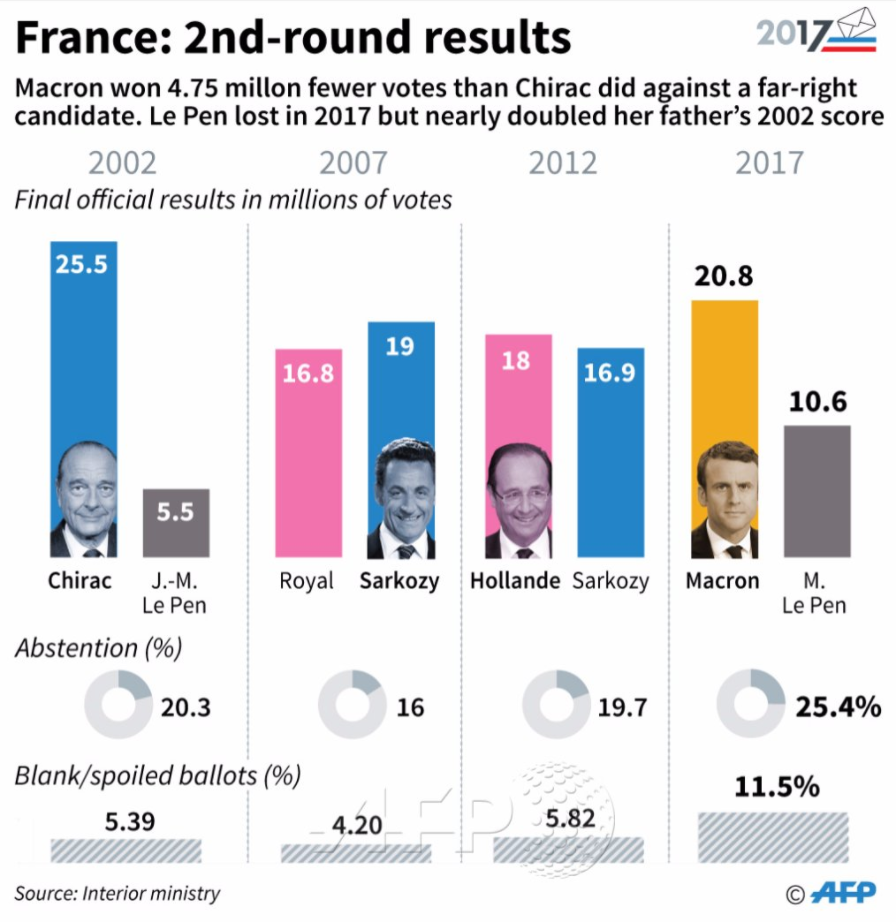 The highest abstention rate since 1969, 25.4% of registered voters skipped going to the ballot box on election day. Another record high, 11.5% of registered voters went to the polls and deposited a blank slip in the ballot box (voting “blanche”); That’s nearly double the 2012 presidential election’s percentage of blanche voters (5.82%). The abstention and blanche voters rates combined indicate that one-third of all registered voters didn’t want either candidate. For many French voters it was a which-one-is-worse vote. In a New York Times article, voters for Macron expressed their apathy toward him—“He’s not someone I feel a lot of conviction for”—and resolve to vote for him in the face of populism—“Mostly, I voted against Le Pen.”

Macron just won an election in a deeply divided country. Accepting refugees or turning them away, pro-EU or Frexit, what to do about terrorism, high unemployment rates, slow economic growth, and laïcité—all are hotly debated topics with opinions regarding them divided along party lines. As president, Macron, a man who has never held elected office before, will make decisions that are sure to anger large portions of the population. He promised to bridge the divide in his victory speeches on May 7: “I’m aware of the divisions in our nation… I’m aware of the anger, anxiety and doubts that a large proportion of you have also expressed… My responsibility will be to bring every woman and man together, ready to confront the immense challenges awaiting us, and to act.” Macron has consistently shown respect for Le Pen and her supporters, telling his supporters not to boo her. In his victory speech, Macron once again hushed his crowd: “For those who voted for Madame Le Pen, [boo’s from the crowd] Don’t boo them. They expressed today, an anger, a helplessness, occasionally beliefs; I respect them. But I’ll do everything in the 5 years to come so that they don’t have any reasons to vote for extremes.”

Let’s see what he can do.