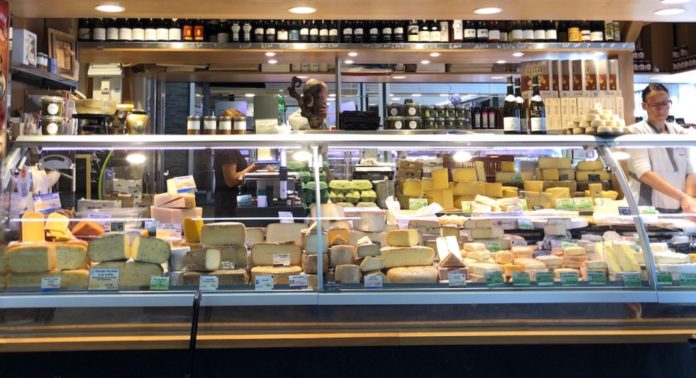 Cheese starts as milk — cow, sheep or goat — to which cultures of bacteria are added. Certain cheeses rely heavily on brevibacterium linens (b. linens) which is also the bacteria responsible for, yes, body odor. So when someone describes a cheese as smelling like old gym socks, they’re not kidding!

B. linens thrives in moisture, which is why hard cheeses have mild odors while moister, creamier cheeses are often the strongest smelling. Not only that, some cheeses have their rinds washed throughout the aging process, keeping them moist — a perfect environment for b. linens to go forth and multiply.

And then there’s mold, the not-so-secret ingredient behind some of the world’s most odiferous cheeses. “Moldy” is not what most people consider a good smell. And when mold is put into a cheese, like the famous bleus of France, and then left in a moist cave to ripen for months… mon dieu, open the window so we can get some fresh air!

Is a strong smell the mark of a strong cheese? Not necessarily. Some cheeses, like the famous Époisses of Burgundy, have pungent odors but mild tastes. This is true of many washed-rind cheeses, where the powerful aroma comes from the rind and not the creamy interior. Blue cheeses are a different matter because the mold is throughout the cheese, giving every bite a strong flavor.

What should accompany a good, aromatic French cheese? A crusty baguette, of course! Plus many français like something sweet, like fig jam or honey, or maybe some Port or Sauternes. A glass of Sauternes with a good Roquefort is one of the classic wine and cheese pairings.

Let’s take a look at some of the smelliest cheeses of France, listed in no particular order.

Researchers at Cranfield University in the UK, using an “electronic nose” and a panel of tasters, once named Vieux-Boulogne as the smelliest cheese in the world. It comes from the Pas-de-Calais department in northern France and is a soft cheese with a rind that is repeatedly washed with beer — a paradise for b. linens. Eat this cheese if you dare!

Époisses is so smelly that it is reportedly banned on public transportation in France. It’s another washed-rind cheese, washed this time with Marc de Bourgogne, the local brandy of Burgundy. It comes in a wooden box and is so creamy that it is often eaten with a spoon. And it’s delicious! Époisses was a favorite of Napoleon and was called “the king of all cheeses” by the famous epicure Brillat-Savarin.

Legend has it that Roquefort was discovered by a young man who forgot his cheese sandwich in a cave. Returning months later, he discovered that the cheese had become moldy and delicious (and really smelly). Voilà, a new kind of cheese! Today the cheese is aged in those same Roquefort caves and uses the mold that grows there (penicillium roqueforti). And it’s as smelly as ever.

Though the United States’s “Camembert” might have a subtle odor and flavor, this is not the case in France. A cheese columnist once compared the smell of Camembert to “garlic, barnyard and ripe laundry.” Well, that certainly whets your appetite! Camembert comes from Normandy and is sprayed with a mold during ripening to help it develop its distinctive odor. Camembert was issued to French soldiers as part of their rations during World War I, making it popular all over the country.

Munster comes from the Alsace region of France, near Germany. Its rind is washed in brine during aging, encouraging the b. linens to multiply and giving it an aroma that has been described as “post-workout underarm.” The taste is mild… but eating a Muster sandwich on a crowded train is definitely not advised!