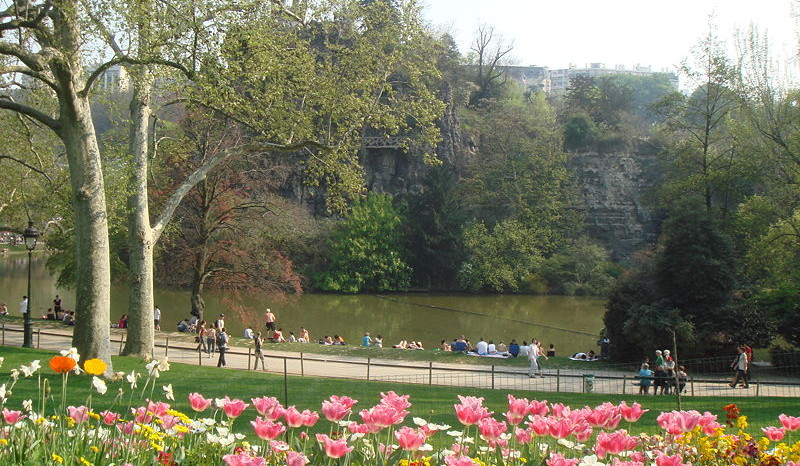 5 Reasons to Go to Paris in April

Chestnuts in blossom, holiday tables under the trees… Ella Fitzgerald got it right when it comes to enjoying April in Paris. As the weather warms and street side terraces start to fill back up, Paris comes alive with cultural events for all ages. Follow the locals and head over to these April events before indulging in your first glass of rosé of the season.

Jean-Paul Gaultier at the Grand Palais

Over a million visitors around the world have had a chance to see iconic fashion designer Jean-Paul Gaultier’s retrospective exhibit…except the French! Finally, Gaultier’s fashion-forward creations have landed in France, and what grandiose space could be more fitting than the exceptional Grand Palais?

Visitors are taken on a tour through Jean-Paul Gaultier’s wild imagination, with an exhibit showcasing over 175 outfits designed from 1976 to 2014. Fans of his signature striped looks won’t be disappointed, and neither will the catwalk addicts: a runway displays some of Gaultier’s most star-studded designs…with his A-list muses in attendance as well.

Who said Paris wasn’t a party city? Electro music lovers rejoice: this April, Paris will be home to two days of the best electro music artists, in an impressive show of lights, sound, and the beating hearts of ten thousand (you read that right) partygoers. 3500 square meters of space for an impressive lineup that’s usually easier to find in Berlin than the city of love.

Discover another Paris: the one that lies beyond the city walls, in the northern suburbs that are more go-to for good music than no-go as some would have you believe.

Did you really think Paris was a safe haven, protected from the Harry Potter frenzy that has been shaking the world for years? Les fans of Harry Potter all around France have cause to celebrate, as the global Harry Potter exhibit phenomenon has finally landed on their turf, in Paris.

For first-timers or repeat visitors, the enchantment is definitely there, through life-size replicas of Gryffindor, Quidditch games, and more. Parents, watch out: they say Harry Potter is for the younger generation, yet you’ll surely find yourself pulled into its mesmerizing universe. April sees its fair share of rain in Paris, and this is a perfect way to forget about the drizzle and dream a little.

The Gare de l’Est, literally Eastern Station, in the 10th arrondissement of Paris, is the hub for trains connecting France to its neighbor Germany. In celebration of the 25th anniversary of the fall of the Berlin Wall, it will become home to sections of the Wall starting this April and throughout the spring.

Christophe-Emmanuel Bouchet, Kiddy Citny and Thierry Noir, famed Berlin Wall artists, will decorate the Wall sections in a live street art installation, giving Parisians and tourists in transit a good reason to linger a little longer in the station’s neighborhood. Flash codes on the wall will direct viewers to a mobile site with information on the art and the unforgettable historical context. A great chance to see some art, history, and the newest hip part of Paris.

Spending time outdoors is one of the main draws of Paris in April: although it’s hit or miss, sunny days don’t get any better, with glittering blue skies and a smell of Spring that wafts through the air.

For days just like this, head out to the Longchamp or Auteuil hippodromes — a stone’s throw away from central Paris — for a day at the races. Betting on races is fun enough, but this year things have gotten even better. An hour before the races begin, children can enjoy a treasure hunt while parents learn more about the art of racing and discover what goes on behind the scenes. It’s fun for the horses, too: ponies get their time in the spotlight with their very own races.