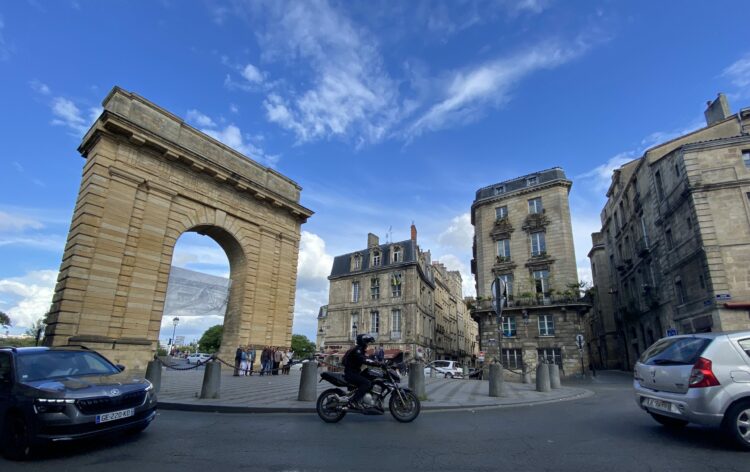 It’s hard to even say the name “Bordeaux” without conjuring images of rolling vineyards and luscious red wine pouring into a tasting glass. But this city in the Southwest of France has a lot more going for it than just viticulture (though wine lovers will not be disappointed by their options). Long a bastion of France’s wealthy elite, the Bordelais know how to live well, as exemplified by their gastronomy, architecture, and cultural destinations. So if you’re thinking about passing a weekend in Bordeaux, you’ve got plenty of options on deck. 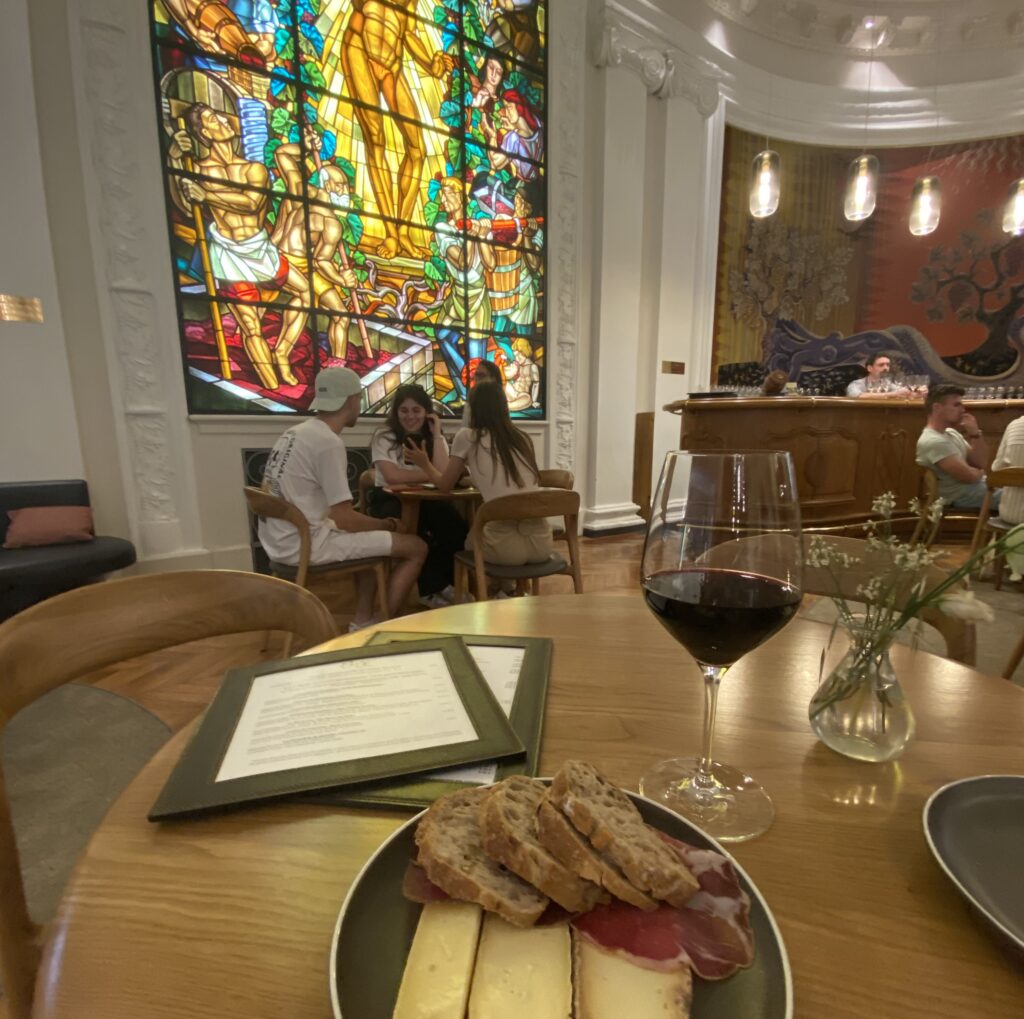 Even if you get into the city late, there’s no better place to start your Bordeaux experience than Le Bar à Vin. Located in the same building as the Bordeaux Wine Council, this glamorous bar, centered around an enormous stained glass window depicting Bacchus, is devoted to teaching visitors about Bordeaux’s local wines. A glass of red, white, rosé, or sparkling will cost you between €3 and €5, and there are plenty of cheese and charcuterie plates to pair with your selection (and even a chocolate sampler!).

Looking for a little music? Enjoy a low key night of gypsy jazz or swing at Thélonious, where the music starts at 8:30pm and runs past 11. Want something a little more lively? Try La Guinguette Chez Alriq on an open air riverside terrace for styles ranging from African music to Flamenco to Neo Folk. 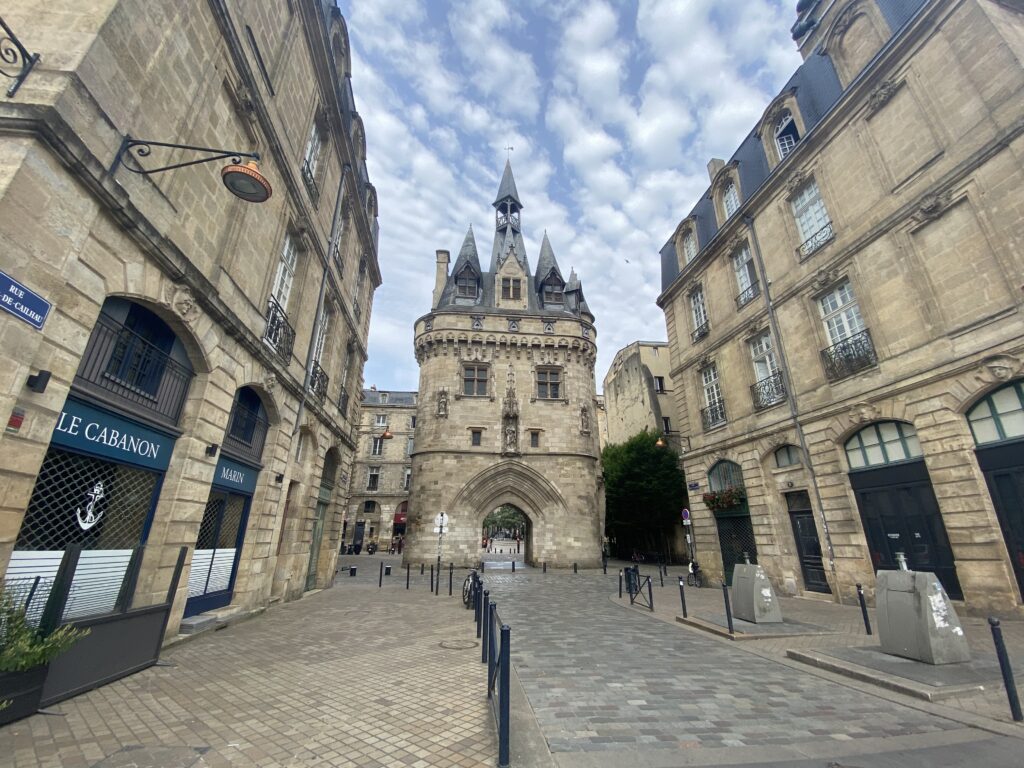 Spend the morning wandering around Bordeaux’s center city, which might remind you a little of Paris. This is because, in the 18th century, Bordeaux’s modernization inspired the famous Parisian Haussmannian style of architecture. The main difference is Bordeaux’s limestone, which may appear black or streaky, because it absorbs car exhaust and pollution. Major efforts, including the pedestrianization of the center city, have been taken to restore these buildings to their original splendor. The Place de la Bourse, Place des Quinconces, Grand Théâtre, Cathédrale Saint-André, and Grosse Cloche are just a few of the architectural marvels worth passing by. You’ll also inevitably walk down Rue Sainte-Catherine, the longest pedestrian street in Europe, and a destination for high end shopping. 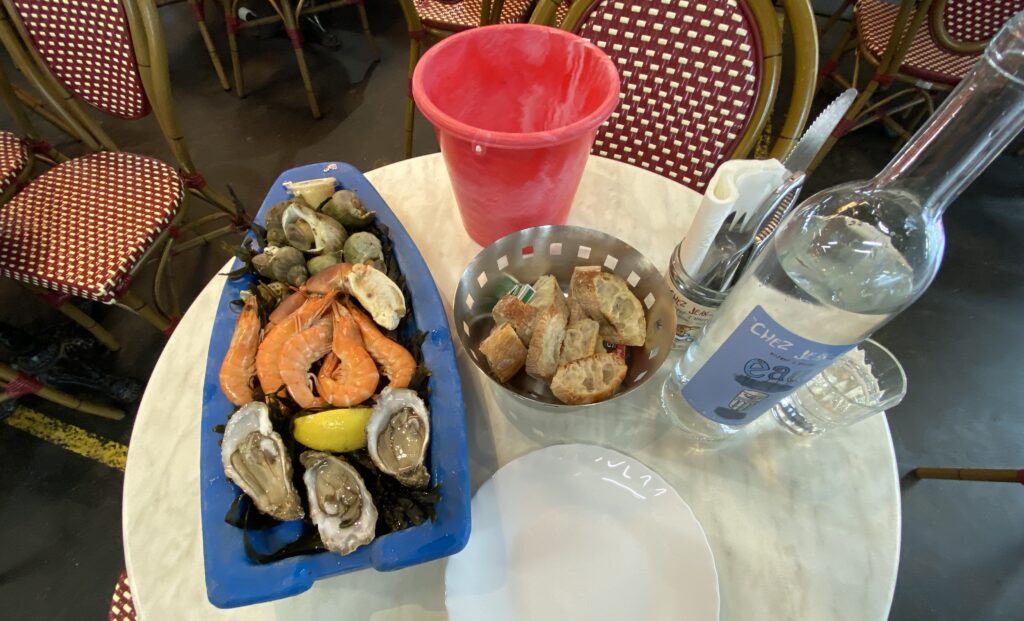 Bordeaux is another of France’s gastronomy capitals, and it’s easy to eat well there. After all, where else can you go that specializes in both foie gras and oysters? For lunch, head to the  Marché des Capucins, a covered market full of fabulous places for a quick bite. In particular, go for the €15 seafood platter at Chez Jean-Mi, or maybe just oysters and a glass of white wine.

Bordeaux has always had money, and recently they’ve been pouring it into state of the art museums. The most famous, by now, is the Cité du Vin, an eight-story temple to wine built in the shape of a decanter. It’s full of interactive exhibits, even some smell-o-vision, that explain the history, production, and consumption of wine. You could easily spend the entire day there, and your ticket comes with a glass of wine on the museum’s Belvedere terrace bar when you’re done, so don’t feel badly about skipping over the temporary exhibitions. 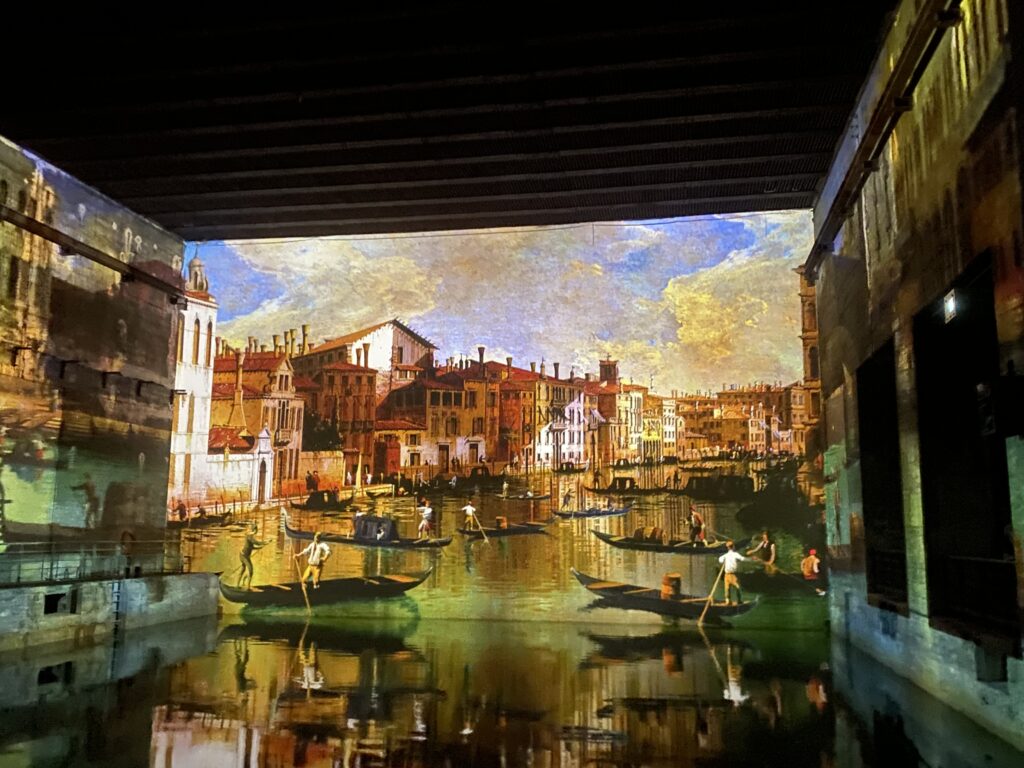 If you’re not a huge oenophile, no problem. One of Bordeaux’s other fantastic museums is the Bassins des Lumières. This immersive digital arts space is one of the largest in the world, set in a converted wartime submarine base. Its current program includes an installation on Venice, and the pools of water where submarines were once stored transform into canals, plunging you into Italy at dawn. 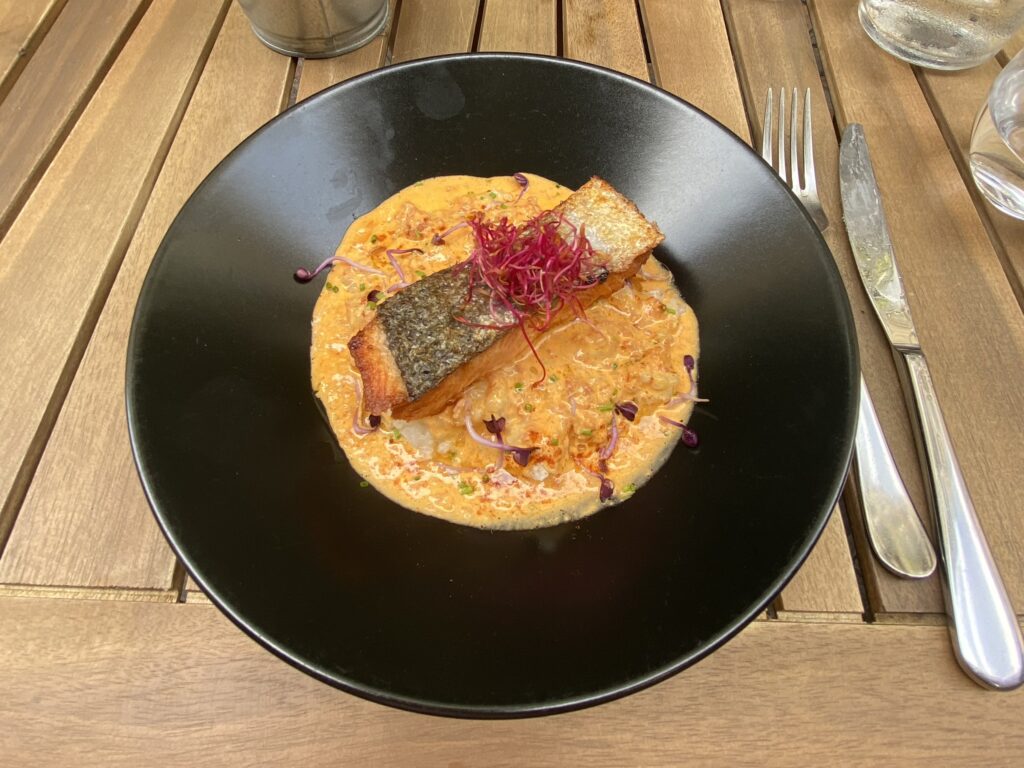 For dinner, choose from among an array of options. At Tutiac, a bistro created by a winemaker, the menu changes every three weeks, and all wines are as local as it gets. The pocket-sized Les Drôles offers a three-course dinner menu for €22, while local favorite, Mélodie, serves up traditional favorites in a three-course menu at only €20. Be sure to make reservations in advance, as these places will fill up! Make sure to try some duck, a local specialty, or some Saint-Nectaire cheese. 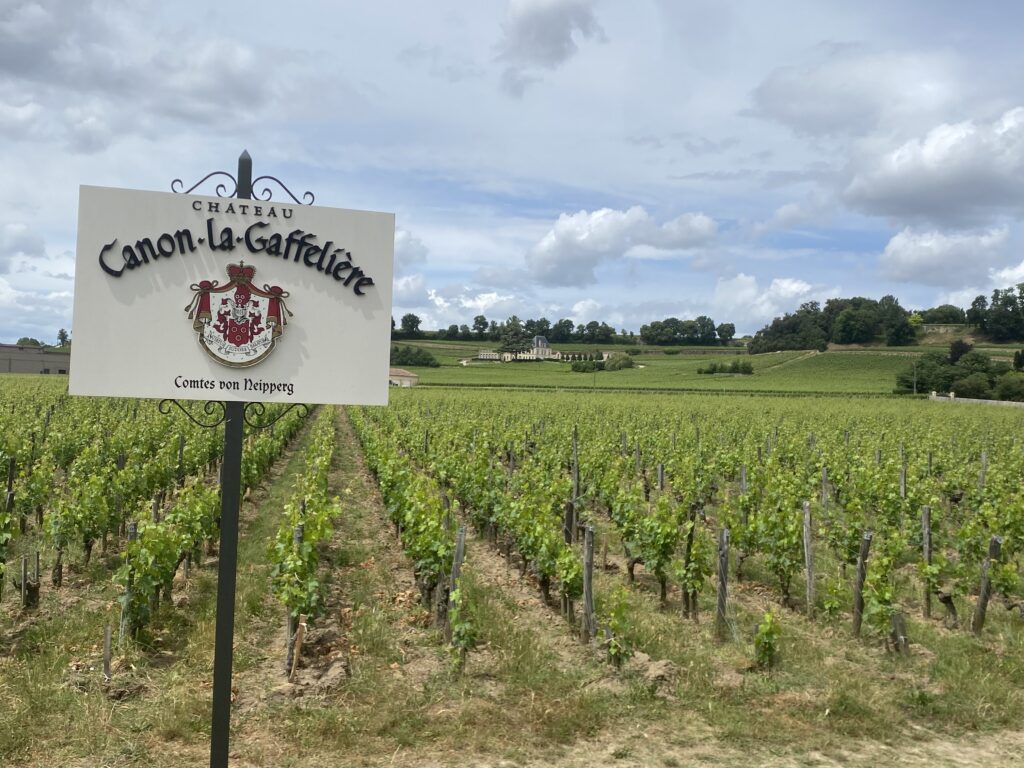 Even if you’re staying in Bordeaux for a short amount of time, you can still fit a vineyard trip into your itinerary. Most of the vineyards in the area are located in the nearby town of St-Émilion, which is just a short train ride away. Château Canon la Gaffelière is located right next to the train station, an easy trip if you time your reservation with the train schedule in mind. Tours start at €15, and the train will cost you between €5 and €10 each way. If you don’t want to leave the city, there are two vineyards in Bordeaux: Château Pape Clément, and Château Les Carmes Haut-Brion. Les Carmes Haut-Brion is the easiest to get to, right off the tram line, but as a result, the cost of a tour is far higher than the average, and they often book up far in advance. Pape Clement is just a bit farther out, but accessible by a number of public buses, and a tour will cost you as little as €20. Reservations for vineyard tours are non-negotiable, and should be booked at least a week or two in advance.

For a sweet snack, swing by La Toque Cuivrée for one of Bordeaux’s famous canelés–a pastry flavored with vanilla and rum. They have something of a love-it-or-hate-it reputation, so don’t be afraid to purchase a mini if you’re not sure whether you’ll like it or not. Canelés also make a great gift to bring home at the end of your trip, though we’d recommend not letting them sit for too long.