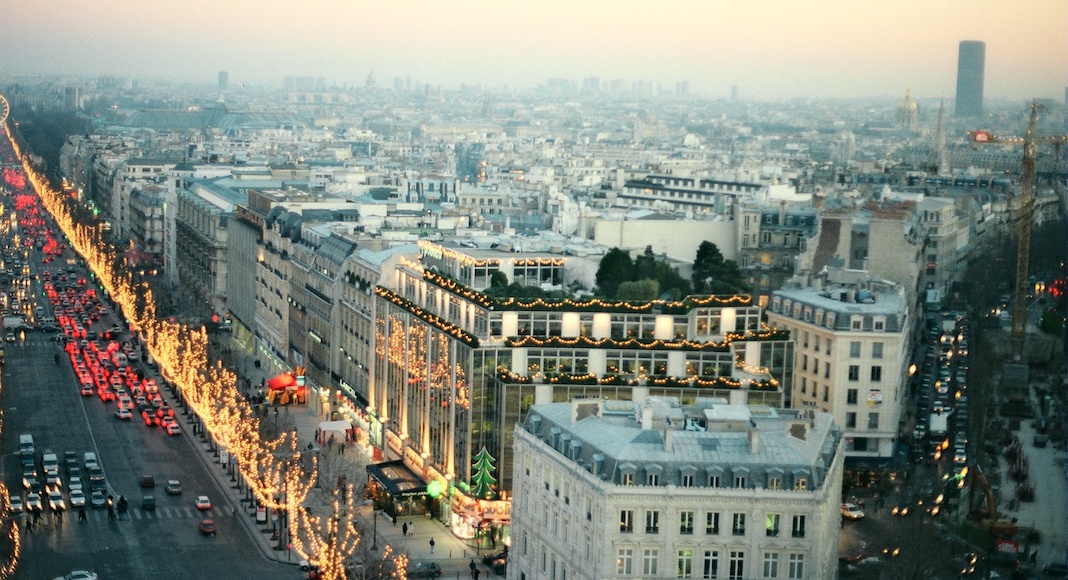 10 Things to Do in Paris in December

In collaboration with the New York Met, the Réunion des Musées Nationaux, and the Irving Penn Foundation, the Grand Palais is putting on the first major retrospective of Irving Penn’s work in France since his death. With more than 235 photos and a selection of drawings and paintings, the exhibit shows the wide range of subjects and skills mastered by the American artist. Looking over his iconic photos, you can’t not be transported to his world. Buy tickets here so you don’t have to wait in line to get in!

Of course New Yorkers are familiar with the stunning windows of Saks and Lord and Taylor, but you haven’t really seen the beauty of a window display until it’s set cleanly against Haussmann architecture in the city of lights. The big department stores like Printemps, Le Bon Marché, and BHV lead the pack, alongside Galeries Lafayette who goes all out with their annual holiday tree in the dome of the women’s department. (This year it’s carnival themed!) Take a stroll down Faubourg Sainte-Honoré (2e), Avenue Montaigne (8e), and around the Place Vendôme (1er) to complete your window-viewing tour.

Back and for its 29th year, Africolor puts “African music” in the spotlight. The organization themselves put “African music” in quotes, because the festival is founded on the idea that there’s one family of “African music” that contains characteristics like polyrhythmic sounds, lack of meter, and particular vocal qualities. All of the music that grounds itself in the qualities of “African music” are highlighted in this festival, whether they be from the Caribbean, the Indian Ocean, Brazil, Mali, or anywhere in between. The schedule of performances is available here.

Whether it’s an early gift for a friend or a gift to yourself to help you prepare for the holiday season, there are plenty of opportunities to become the master French chef you always wanted to be. We like Le Foodist and La Cuisine Paris; both are intimate venues that teach not only about cooking, but also about French culture through their food. At Le Foodist, there are cooking classes (of all the French classics, of course), wine tasting courses, and food tours. Most classes are 99€ and up, but a few are 69€. La Cuisine Paris teaches you how to cook in a normal kitchen so the transition from class to home is easy. Besides the standard cooking classes and food tours, they also offer technical classes like one on knife skills.

While it’s true that many of the usual ice skating rinks on the Champs-Elysée, Hôtel de Ville, and Eiffel Tower have been shelved (most likely for security reasons) there are still a few skating rinks open in the city. You can skate for free on the Champs de Mars below the Eiffel Tower (December 21-January 8), which will be open from 11am-9pm, or for 10€ on top of la Grande Arche at La Défense, 110 meters up in the air. The rink is open December 15-January 14, and skates are available for rent for 3€.

After a 20-year run, one of the world’s first concept stores is closing. Colette has held a special place on the Parisian fashion scene for its collaborations with celebrities, chefs, and designers, imbuing the concept of style into every aspect of life. Be sure to stop in before the store closes for good on December 20.

Many people in France are at churches and cathedrals for religious reasons around the holidays, but you can certainly be there to appreciate a little classical music in a beautiful setting. Vivaldi’s Four Seasons, Ave Maria, and other sacred music will play at Eglise Saint-Paul-Saint-Louis on December 23 and 30, Mozart’s Requiem will be performed at La Madeleine on December 22, and the Notre Dame Christmas Concert will happen on December 22. Vivaldi’s Four Seasons will be the Christmas concert at La Madeleine on December 23, 25, and 28. For a full list of classical music events happening in Paris in December, click here.

8. Shop the Holiday Markets (mostly until the end of December)

Though it’s no Strasbourg, the Parisian holiday markets are impressive. In les Halles, at the foot of the Eiffel Tower, below Notre Dame, along La Défense, at Place des Abbesses up in Montmartre, Saint Germain des Prés, Invalides, and the Gare de l’Est, the Christmas markets abound with gifts, edible treats, and goodies that you’ll gift to yourself. Obviously some will be more crowded than others, but avoid peak hours and you’re sure to delight in the tradition.

Receiving the Palais de Tokyo’s third “Carte Blanche” exhibition, Camille Henrot took full advantage of the opportunity to put forth a truly philosophical exhibit. “Days are Dogs” questions why we have the week. Days correspond to the rotation of the earth, months according to the position of the moon, and years by the journey of the earth around the sun; weeks are entirely artificial, and yet they conduct our lives. Henrot has set up seven rooms to represent the seven days of the week, each with a distinct personality based on the cosmos and mythology, as well as our modern ideas, affiliated with each day.

Yes, you read that right. Vin chaud is hot wine, and it’s delicious. A classic winter treat to warm you up both inside and out, you can drink vin chaud at many places in the city for under 10€. The place you’ll definitely be able to find vin chaud is in the holiday markets. Get yourself a glass for a few euros and peruse the stalls because, hey, it’s France, it’s fine to wander the streets with a to-go cup of hot wine!